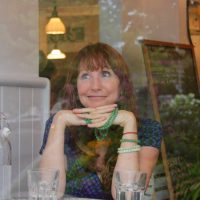 Lee (Mirabai) Harrington is a Devotional Mantra Music artist based in New York’s Hudson Valley. A life-long spiritual seeker, she has been studying yoga since her teens and has been on the Mantrayana (Vehicle of Mantra) path of Buddhism since 2002. Her passion for—and commitment to—the healing power of mantras has led her to explore ancient mantras and chants from many other traditions, including Hindu, Sikh, Native American, Shamanistic, Taoist, Sufi and ancient Christian; and she counts among her teachers His Holiness the 17th Gyalwang Karmapa, Amma, Meher Baba, Shyamdas and Yogi Bhajan. Her daily practice, however, remains rooted in Buddhism, Green Tara and the Divine Mother in all Her forms.

For Lee, leading kirtan is not a performance, but rather a truly spiritual, devotional and healing experience. She believes that each of us has the power and ability to heal the self—and countless others—through our own unique voices and through these mantras.

She has sung for His Holiness the 17th Gyalwang Karmapa at Madison Square Garden and for Amma (the Hugging Saint) at Amritapuri Ashram in India.

She has been blessed to sing or record with such kirtan luminaries as Gaura Vani, Ilan Chester, Brenda McMorrow, Adam Bauer, Anthony Molina, SRI Kirtan, Steve Gorn, Irene Soléa, Radharani, Drukmo Gyal Dakini, Chimey Lhatso, Brenda McMorrow, Johanna Beekman, Sirgun Kaur, Radharaniand many more. The biggest blessing of all has been to chant for the past decades with her weekly hometown community kirtan sangha in Woodstock, NY.

Her debut album, Beyond the Beyond—an eclectic mix of mantra music from the Buddhist, Hindu and Sikh traditions—was released in 2016. A limited-edition EP of the Buddhist tracks from this album, entitled Into the Beyond: Modern Renditions of Ancient Buddhist Mantras—was released on 4/18/2015, in honor of His Holiness the 17th Gyalwang Karmapa’s visit to the United States. The whole project has received the special blessings of the Venerable Khenpo Karthar Rinpoche.

Born into a musical family, the young Lee sang in numerous church choirs (including the famous Riverside Church Inspirational Choir—an exuberant gospel choir in Harlem and with the occasional short-lived rock band.  She has studied Classical Indian vocals in India with Lakshmi Santra of Pondicherry and Silvia Nakkach of California.  She has also studied harmonic singing and vocal toning with David Hykes and Timothy Hill and has taken sacred voice workshops with Silvia Nakkach and Simrit Kaur. Endlessly enraptured with the healing power of sound in all its forms, Lee has also studied many modalities of sound healing with such maestros as Don Conreaux (gong), John Beaulieu (tuning forks) and Philippe Pascal Garnier (bowls) at the Sage Academy of Sound Energy and the New York Open Center.  She has studied Tibetan medical mantras with Dr. Nida Chenagtsang of the International Academy of Traditional Tibetan Medicine.  She is also a certified Pranic Healer and a long-time student of Kundalini Yoga. And finally, she currently enjoys singing first soprano with Bard College’s Symphonic Choir and with the Phoenicia International Festival of Voice opera chorus.

For her day job, Lee is a critically-acclaimed author, freelance book editor and professor of creative writing at New York University. Her first book—a memoir entitled REX AND THE CITY—was published by Random House in 2006 and reissued by Diversion Books in 2014. She writes for such diverse publications as Bark, Salon, Huffpo and SpiritVoyage.com. She is also working on several book projects. One of these days she hopes to complete that memoir about her year spent living at Buddhist retreat center in Colorado and working as a decorative painter for the Great Stupa of Dharmachakra. For more information on Lee’s writing life, visit www.emharrington.com.

A dedicated vegetarian, animal advocate, and dog lover Lee serves as a volunteer at animal shelters, where she offers energy healing and sings mantras to rescued dogs.

She dedicates the merit of all her spiritual practices for the benefit of all sentient beings.